I think it is fitting to begin this blog with a story. This one is fresh, but has already been added to the repertoire of my overall life story, a tale I can tell at Thanksgivings and parties to come. I would not call it an overall life-changing event, or even that long of a tale, but it is one of amusement and good laughs…although I wasn’t quite laughing at the time. I’m jumping right in, but don’t worry, I will also take a step back and provide you with the larger context. So, here it goes:

I am a member of the unofficial Roon Platoon (i.e., Mushroom hunters) here in the Sterling area of the Kenai Peninsula in Alaska. We’re an eclectic crew brought together by our other job. As a photographer, I overheard them talking about their quest and I wanted to partake in it, for I had not gotten off campus since arriving in Sterling, Alaska. As a photographer, they happily let me come along. As far as morel hunting goes, it is wise to journey to areas of old forest fires, for the soil is rich and abundant in nutrients. Hardwoods and moist areas, like in gullies or near muskeg swamps, are your best chance at finding these delectable mushrooms. Unfortunately, due to the warm and dry weather, we weren’t having much luck. On our first stop, we found one healthy morel. 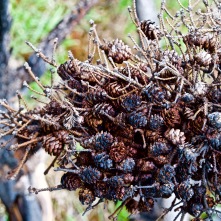 The third burn are

a proved to be the most interesting and where the crux of this story takes place. We decided to all split up to see if that would bear more fruit, as it were, and so two in the group crossed the street while myself and two others entered the woods on the right side of the road. I wanted to stick close to the group as I did not bring my bear spray or my pocket knife with me. We gave each other a little bit of distance until one girl whooped with joy after finding another cluster of morels. Before picking them, I put my camera to work and snapped a few photos. It was a happy moment, one that made me realize how much fun morel hunting could be. One of my cousins has been doing it for all the years that I have known him, spending long stretches each spring on family property in rural northwest Illinois. I remember going with him into the forest once when I was little, but since then, I had not. While the forests in Illinois are deciduous, the forests up here in Alaska are boreal, so conditions are not quite the same. With Alaska being as far north as it is, the season for morels comes much later than in Illinois. I can tell you what is unequivocally the same, however, and that is mosquitoes. This year I turned to all-natural bug spray and it is much more pleasant.

Now here comes the fun. The third burn area led us to a huge muskeg, derived from Cree word muskek, meaning low-lying swamp. Muskeg consists of dead plants in various stages of decomposition such a

s nearly intact sphagnum moss that can hold 15 to 30 times its own weight in water, causing the spongy, wet muskeg to slope downwards. They are ideal habitats for pitcher plants, beavers, and mushrooms. They are also a mosquito breeding ground. It’s often hard to tell at first that there is a swamp because it often looks just like a forest floor, such as the case in the image on the left. This was my mistake. At first, I was able to creep across its squishy surface with some ease. I thought it would be great to get to the other side of this muskeg meadow to see if there were any morels I could find. About halfway across, I heard two whistle blasts, which was my cue to turn it in and head back to the car. By then, the journey across the muskeg was becoming increasingly wetter and more difficult. I had a decision to make, do I backtrack, do I beeline straight for the road, or do I get to the thick trees on the other side of the muskeg and hope for the best? I chose the third option based on the assumption that the thick of trees would indicate solid ground, as it had on the right side of the picture above. It didn’t. Instead, it got hopelessly worse. I was sinking and the mucky, swampy water was only a few inches from the tops of my XtraTuf rubber boots. I called out to the Roon Platoon about my predicament and they all burst from the bushes by the road to see what was happening. I had become concerned because I was no sooner to getting out and by then

I couldn’t backtrack. With my camera in my hand and no solid ground, I did not want to get my equipment wet. They encouraged me to move quickly, thinking momentum would prevent me from sinking any further. I tried as best I could to pick up my pace, but it was too late, the water soon rose higher than my boots and, well, you can guess what happened next. I invited the swamp into my boots. After much ado, I finally made it out of the muskeg, laughing and in good spirits. Before leaving, I emptied several inches of water out of my boots, stripped off my socks, and drove barefoot back home.

I learned some valuable lessons from this particular adventure, from how to search for morel mushrooms to learning the hard way about what not to do when you come to a muskeg swamp. It took a hairdryer to dry out my boots, a shower to wash off the mud, and laughter at the memory. But it was, all in all, a good day.

3 thoughts on “Mushrooms and Muskegs”